Before the Flood Screening at Evanston Library – October 22nd

Attend a free screening of this riveting documentary from Academy Award-winning filmmaker Fisher Stevens and actor, environmental activist, and U.N. Messenger of Peace Leonardo DiCaprio. Before the Floodpresents a dramatic account of the changes now occurring around the world due to climate change. Most importantly, the film outlines the actions that we as individuals and as a society can take to prevent the disruption of life on our planet – a topic to be followed up on in discussion.
Where: Evanston Public Library Community Room
When: Sunday, Oct. 22nd, 2-4 p.m.

This Book Sale has been called “The Best” by the Chicago Reader.
Browse through 1000s of high-quality books in every category of fiction and non-fiction for both adults and children. Enjoy low, low prices, recent titles, and favorite authors.
Buy gifts for others and yourself too, and while you’re at it, every penny you spend supports the Library.

Come take the Index Card Tower Engineering Challenge! Families with children ages 6-10 are invited to fine-tune your engineering skills in this fun STEM session with an engineering expert and library staff.

Space is limited and registration required.
Call the Evanston Public Library Children’s Services at: 847-448-8610 to register.

END_OF_DOCUMENT_TOKEN_TO_BE_REPLACED

Come bring the family and celebrate Chinese New Year in two languages! We will hear a Rooster story, enjoy making Year of the Rooster crafts and the children will march in a rooster-themed Lion Dance parade. Both Chinese and English speakers welcome.

The 39th Annual poetry contest will open for submissions in early January 2017. The submission deadline is March 13, 2017.  Submission rules and judging information.

END_OF_DOCUMENT_TOKEN_TO_BE_REPLACED 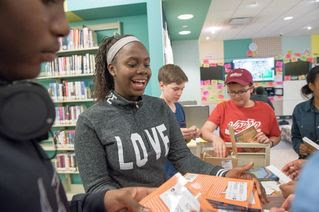 Sound of Music Saturdays. Join Loft staff as we listen to and analyze the music you love plus the music you don’t. Bring fresh ears to deconstruct song lyrics, production, cadences, and song content while creating songs that you like even better. Grades 6-12. Saturdays through December 3, 3-4:30pm, The Loft, Main Library.

Loft Lab: Design. Tinker with and make all kinds of amazing projects. Each week we’ll have a different group activity like 3D design, coding or sewing. Come to all the sessions or just the ones that interest you. We provide the supplies, you bring the creativity. Grades 6-12. Drop in. Saturdays, 1-3pm, The Loft, Main Library.

Hour of Code is coming! Take part in the world wide celebration ofcoding at the Loft. While you’re here you can learn how to program your own video games, make art using coding or learn the basics ofJava script or Python. We’ll have some unplugged coding activities too! Drop in. Grades 6-12.  Wednesday, December 7, 1-5pm, The Loft, Main Library

Little Explorers: Sea Life! Join us as we introduce your preschooler to the wonders of ocean life. Young explorers ages 3-5 should be accompanied by a parent or caregiver; we will learn about the ocean, identify some seashells, and make our own crab from a real shell! Register online or call 847-448-8610. Register today! Saturday, December 3, 11:00am, Children’s Room, Main Library

Caldecott Club for Kids in Grades K-4. We have Caldecott Fever! The Caldecott Award is a national award given to the illustrator of the best picture book of the year. We will share what makes an award winning picture book and give the inside scoop on how the Caldecott Medal is awarded. Register for the December 8 meeting, in person, or by calling 847-448-8610.  Each meeting is limited to 20 participants in grades K to 4. Thursday, December 8, 7pm, Children’s Public Conference Room, Main Library

Not sure how to fill out the FAFSA form to apply for college financial aid?  The Evanston Public Library will host representatives from the Illinois Student Assistance Commission (ISAC) who will walk you through the FAFSA applications step by step. ISAC mentors will also help you navigate the forms and offer advice on preparing your FAFSA application for submission.

Bilingual assistance will be available at this program.  If all of your questions aren’t answered at this program you can sign up for one-on-one sessions at the Library with an ISAC mentor on January 11 or 19. For teens and their parents.

When the kingdom’s most wanted  (and most charming) bandit, Flynn Rider, hides out in a mysterious tower, he’s taken hostage by Rapunzel, a beautiful and feisty tower-bound teen with 70 feet of magical, golden hair. Flynn’s curious captor, who’s looking for her ticket out of the tower where she’s been locked away for years, strikes a deal with the handsome thief and the unlikely duo sets off on an action-packed escapade, complete with a super-cop horse, an over-protective chameleon and a gruff gang of pub thugs.   2010.
Running time:  100 minutes Rated:  PG

Join us, tributes, to kick off the new year with a showing of The Hunger Games on the library’s big screen! Afterwards, we’ll play games like Wii archery and hold a raffle, the winner of which will represent his district in the capital’s bloody Hunger Games wins a free copy of The Hunger Games on DVD. What better way to spend a mid-break winter afternoon? Snacks and refreshments will be provided. Registration required.

Winter Break Family Films: The Princess and the Frog

Set in New Orleans’ French Quarter, this is a modern twist on a classic tale.  A beautiful girl named Tina finds a frog prince who desperately wants to be human again and, with a fateful kiss, leads them on a hilarious adventure through the mystical bayous of Louisiana.  2009

This retelling of an old Chinese folktale is about a young Chinese  maiden who learns that her weak and lame father is to be called up into the army to fight the invading Huns.  Knowing that he would never survive the rigors of war in his state, Mulan decides to disguise herself as a man and join in his place.  To prevent that, her ancestors order a tiny, disgraced dragon, Mushu, to join her in order to force Mulan to abandon her plan.  Although Mushu agrees, when he meets Mulan and learns that she cannot be dissuaded , he decides to help her in the perilous times ahead.  1998
Running time:  88 minutes  Rated: G